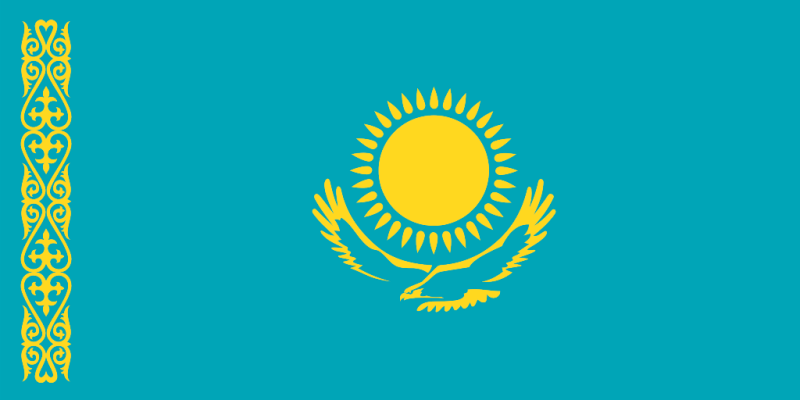 The flag is one of the main symbols of the state, embodying its sovereignty and identity. The term “flag” comes from the Dutch word “vlag”. A flag is a banner of fixed sizes and colors attached to a flagpole or cord, usually with a coat of arms or emblem on it. Since ancient times, the flag has served to unite the people of the country and identify them with a certain state entity.

The national flag of independent Kazakhstan was officially adopted in 1992. Its author is the artist Shaken Niyazbekov.

The national flag of the Republic of Kazakhstan is a rectangular panel of sky-blue color with an image in the center of the sun with rays, under which is a soaring eagle (golden eagle). The flagpole has a vertical stripe with a national ornament. The image of the sun, its rays, the eagle and the national ornament-the color of gold. The ratio of the flag’s width to its length is 1:2.

In the traditions of heraldry, each color symbolizes a certain concept. So, the sky-blue color symbolizes honesty, loyalty and perfection. In addition, the sky-blue color has a deep symbolic meaning in the Turkic culture. The ancient Turks always revered the sky as their god, and their blue-sky banner symbolized devotion to father ancestor. On the national flag of Kazakhstan, it symbolizes the clear sky, peace and prosperity, and the single color of the background – the unity of our country.

Based on the heraldic canons, the sun symbolizes wealth and abundance, life and energy. Therefore, the rays of the sun on the flag of the country have the shape of a grain-a symbol of prosperity and well-being. The image of the sun in the state attributes of Kazakhstan confirms its commitment to universal values and indicates that the new young state is full of life-affirming energy and is open to all countries of the world for partnership and cooperation.

The image of the eagle (golden eagle) is one of the main heraldic attributes that have long been used in the coats of arms and flags of many peoples. This image is usually perceived as a symbol of power, perspicacity and generosity. Soaring under the sun, the golden eagle represents the strength of the state, its sovereignty and independence, the desire for high goals and a sustainable future. The image of the golden eagle occupies a special place in the worldview of the Eurasian nomads. They associate it with such concepts as freedom and loyalty, a sense of dignity and courage, power and purity of thoughts. The stylized silhouette of the golden eagle reflects the desire of the young sovereign state to the heights of world civilization.

An important element of the national flag is a vertical stripe with a national ornament located near its flagpole. Kazakh ornament is one of the forms of specific artistic perception of the world in strict accordance with the aesthetic tastes of the people. Representing the harmony of various forms and lines, it is an expressive means of revealing the inner world of the people. The national ornament along the flagpole symbolizes the culture and traditions of the people of Kazakhstan.