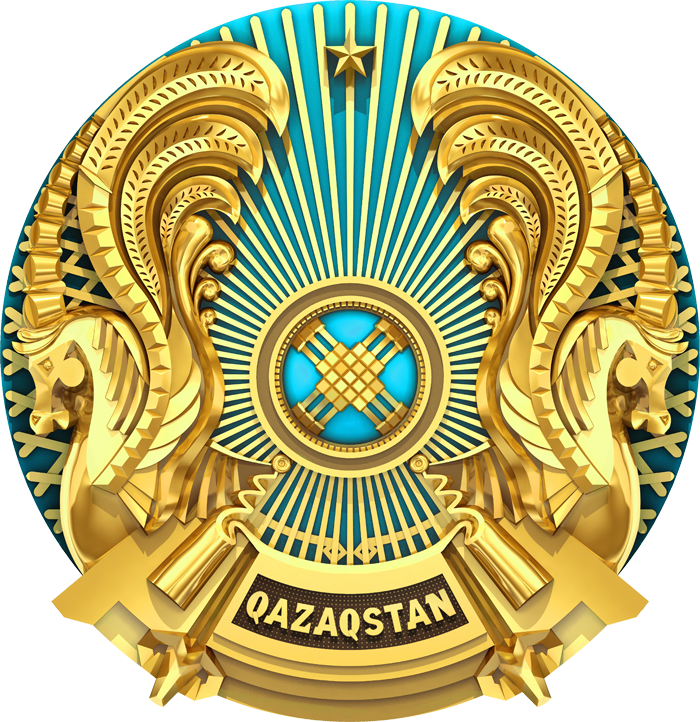 The coat of arms is one of the main symbols of the state. The term “coat of arms” comes from the German word “erbe” (inheritance) and means a hereditary distinctive sign-a combination of figures and objects that are given a symbolic meaning.

History shows that even the nomads of the Bronze Age, who lived on the territory of modern Kazakhstan, identified themselves with a special symbol-a totem, the graphic expression of which later received the name “tamga”. For the first time, this term began to be used in the Turkic Khaganate.

The coat of arms of sovereign Kazakhstan was officially adopted in 1992. Its authors are well-known architects Zhandarbek Malibekov and Shot-Aman Ualikhanov.

The state emblem of the Republic of Kazakhstan has the shape of a circle – wheel) – a symbol of life and eternity, which enjoyed special honor among the nomads of the Great Steppe.

The central heraldic element in the state coat of arms is the image of the shanyrak (the upper vaulted part of the yurt) on a blue background, from which the uyks (supports) radiate in all directions in the form of sunlight. To the right and left of the shanyrak are images of mythical winged horses. In the upper part there is a three-dimensional five-pointed star, and in the lower part there is the inscription “Qazaqstan”. The image of the star, shanyrak, uyks, mythical horses, as well as the inscription “Qazaqstan” – are made in the color of gold.

Shanyrak is the main system-forming part of the yurt, which resembles a heavenly dome in shape and is one of the key elements of life in the traditional culture of the Eurasian nomads. In the State Emblem of the republic, the image of shanyrak is a symbol of a common home and a single Homeland for all the peoples living in the country. The stable development of Kazakhstan depends on the well-being of every citizen, just as the strength and stability of shanyrak depends on the reliability of all its uyks (pillars).

Winged mythical horses-tulpars in the state coat of arms are the key heraldic element. The image of a horse from time immemorial embodies such concepts as courage, loyalty and strength. The wings symbolize the centuries-old dream of the multinational people of Kazakhstan to build a strong and prosperous state. They represent pure thoughts and striving for consistent improvement and creative development. The golden wings of the horses also resemble golden ears and represent the hard work of the people of Kazakhstan and the material well-being of the country.

In the past centuries, the horns were actively used in the cult rites of nomads, as well as as a finial of their battle banners. Images of heavenly grace, earthly fertility and military luck in the form of horns of various animals have always occupied significant places in the symbolic compositions of various peoples. Thus, the winged horse with a cornucopia is an important typological image that has deep semantic and historical roots.

Another detail in the state emblem of the republic is a five-pointed star. This symbol has been used by mankind since ancient times and represents the constant desire of people for the light of truth, for everything sublime and eternal. The image of the star in the state emblem reflects the desire of the people of Kazakhstan to create a country open to cooperation and partnership with all the peoples of the world. The hearts and embraces of the people of Kazakhstan are open to representatives of all five continents.

The main color used in the state emblem is the color of gold, which serves as a symbol of wealth, justice and generosity. There is also the color of the flag-sky blue, which is in harmony with the color of gold and symbolizes a clear sky, peace and prosperity.